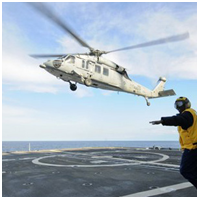 The aim and objectives of the HLO / HERTL Training Programme are to equip the delegate with the initial knowledge, understanding and skills required to perform the role of Offshore Helicopter Landing Officer (HLO) safely and effectively.

HLO’s to understand the importance of pre-planning for and the main elements of the response requirement for a range of helideck and helicopter emergencies. Understand how the limited emergency response capability on an NUI can affect NUI helideck emergency response. The roles and responsibilities of both the HLO and the Helideck Emergency Response Team during a helicopter-related emergency.

The target group for Offshore HLO / HERTL programme is personnel who are to be appointed to the role of an Offshore Helicopter Landing Officer.

9. Understand the structure and terms in a typical pre-flight weather report and floating installation (or vessel) data required by helicopter pilot.
10. Understand how dangerous goods are identified, packaged and labelled according to IATA and ICAO regulations, to include ‘Notification to Captain’ requirement.
11. Understand typical HLO requirements for Normally Unattended Installations (NUIs).
12. Conduct radio checks and use standard radio communications protocols when communicating with relevant personnel, to include HLO-to-helicopter pilot communications.
13. Use correct and appropriate hand signals if radio communications are ineffective.
14. Check the helideck for contamination, debris or damage after take-off.
15. Brief HDAs prior to helicopter landing at appropriate times during helicopter operations.
16. Ensure HDAs are in required locations during helicopter operations.
17. Conduct and respond to required helideck protocols during helicopter operations, to include: safe-to-approach, helicopter anti-collision lights switched off and ‘thumbs-up’ from pilot (as agreed by operating company).
18. Check passenger and freight manifests.
19. Effectively supervise HDAs during passenger, freight and baggage handling (HLOs should not become involved in manual activity, such as carrying bags, at the expense of their supervisory role)