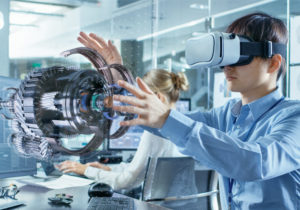 Sub Module -1: Introduction to the innovative visualization systems of augmented and virtual reality for a new way of working

Recipients: users with the need to know and make the best use of the potential and limits offered by current and future visualization systems, starting from augmented and virtual reality.

Objectives: the module aims to introduce the user to the world of visualization systems, including augmented and virtual reality. During the module the different technologies will be presented to transfer to the user the main advantages and disadvantages in the use of these sophisticated visualization systems that we encounter more and more often in everyday business life.

Imagine tapping into a raw data feed from a distributed network of IoT devices in a logistics center. The center is full of robots, employee work stations, and shipping and receiving docks. The data coming back contains important information about machine performance and operational efficiencies. Reading the data correctly will reveal important opportunities to increase productivity.

How do you begin to make sense of it? – visualization systems ar and vr

Before IoT and analytics tools, data fit nicely on a spreadsheet and could, with a little imagination, be exported visually in a chart or graph. Now, in the age of Big Data, the job of reading data often falls to data scientists who apply models to extract useful insights from large data sets. Companies that don’t employ data scientists may use third-party Software-as-a-Service products to churn through data.

But what if there was a way to visualize huge data sets that instantly revealed important trends and patterns? What if you could interact with the data, move it around, literally walk around it? That’s one of the lesser talked about promises of mixed reality. If developers can deliver on the promise, it just may be one of the most important enterprise applications of those emerging technologies, as well.

Though it’s early days, augmented reality and virtual reality could fundamentally change the way we interact with and interpret data. Coming on the heels of the big data revolution, 3D visualizations in mixed reality are the right tool at the right time to help decision-makers understand and glean insights from huge data sets. The technology will unlock the power of big data in realms as disparate as community health & medicine, agriculture, board rooms, and governments, and it could hasten adoption of enterprise AR/VR, which has had a rocky reception so far.