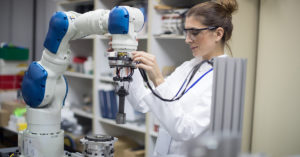 Sub Module -1: Introduction to the functionality of the hybrid factory with advanced and collaborative robotics

Recipients: users with the need to know and make the best use of the potential and limits offered by the so-called robots and expected evolutions.

Objectives: the module aims to introduce the user to the fascinating world of robotics.

Encountered in science fiction films of the last century, the robot is employed in large stages of mass production. During the module, various uses of robots will be presented, in order to better understand the potential for use reached by our fellow workers.

An advanced robotics programming concept is the use of sensors, such as touch, ultrasonic, or light sensors that allow a robot to interact with the real world around it. … Based on movement and sensors, robots can now also use cognition to plan its next move.

Collaborative robots, are entering the manufacturing scene as the next evolution in automated aids. One of the most notable difference between the classical industrial vs. collaborative robots is the lack of physical barriers separating the human from the robot, which implies that the robot’s environment is now dynamic, requiring active sensing and acceptable physical interactions.

Augmenting human performance with the machine precision has enabled modern engineering. From the industrial revolution to space age computing, machines have aveliated the burden of human error and fatigue limits. Contemporary manufacturing has utlized robotics to meet the requirements of highly repetitive and highly accurate tasks, however often these tasks are fixed preprogrammed routines that are unable to handle large process variation. – Advanced and collaborative robotics